Skip to content
Posted in Something for today!!! By LeadWebMasterPosted on 2015年10月1日 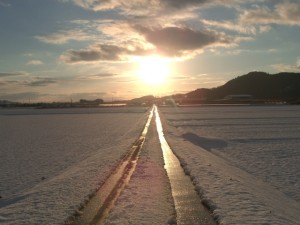 It is a rainy Thursday and I hope that the weather clears for the weekend. The autumn is a great time to get out and have some adventures with friends, family or by yourself. I plan to do some walking in the woods so the weather is quite important. Will it rain? Will the sun shine??

Last time I asked you about the passive voice. Were you able to get it?

I opened the door.

The door was opened by me

He has sent the letter to his brother.

The letter has been sent to his brother.

We use the yen in Japan.

The yen is used in Japan.

Bartholdi designed the Statue of Liberty.

The Statue of Liberty was designed by Bartholdi.

Sandy will pick up the children at 5 pm tonight.

The children will be picked up by Sandy at 5pm tonight.

The old man died in his sleep last night.

THE VERB DIE DOES NOT TAKE AN OBJECT. There is no passive voice for this sentence.

What are the differences and how are they used??

Whatever will be, will be. The future is not ours to see.
Scroll to top